Last Saturday was pit bull awareness day, and this week wraps up awareness month. I’ve seen tons of stats, and this one really stayed with me:

On average, 22 people are attacked and killed each year.

Now you are aware, and I bet from now on, you will cross the street whenever you encounter a cow.

A certain cow-spotted fellow and I are building our awareness.

I now know that when at a vet’s office, to ask what the side effects of steroids are. I won’t go into detail, but let’s just say they were extreme, and had me worried that we’d lost ground in building Bosco’s confidence. 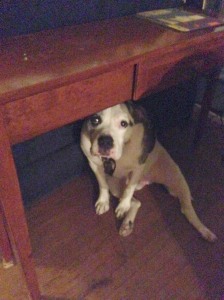 We each became very aware of food. Bosco did not know that wonderful things like peanut butter and cream cheese existed, and does not care that there are pills jammed in them. Now he knows to wait until my back is turned to stand up on the counter and eat out of the containers. Now I know to close lids and put things back right away.

I have experienced the hysteria of an 80 pound dog who thinks he will starve if he has to wait another hour until supper. I am aware that no matter how ravenous he is, he still will not eat green beans or carrots. Even if they are covered in peanut butter or cream cheese.

We are both aware that he can lose all inhibitions and be silly and super-cuddly, and run in circles and sit ON my lap and demand tummy rubs.

And now that the drugs are leaving his system, he’s ready to relax. He is newly aware of the greatest doggie possession that isn’t food – a warm fleece blanket. 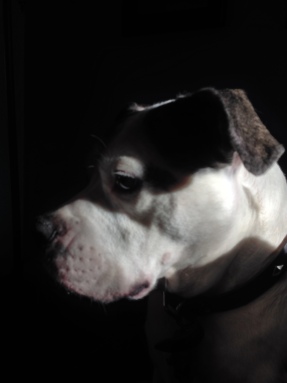 We interrupt your regularly scheduled blog for a very special announcement…..

Emotionally, Bosco became mine as I drove on I-78, somewhere around the Hellertown exit. Legally, he became mine three weeks later when I handed some cash to BARC shelter and swore I would always do what’s right for him.

I’ve always loved my dogs with all my soul. I’ve also always had this Peanuts cartoon stuck in my head – the one where Lucy says (of Snoopy) to Charlie Brown, “He only likes you because you feeeeeeeed him.” God, Lucy’s a jackass.  But it made me wonder what the dog/person relationship was like from the dog’s side. Is it just food, shelter and security?? I didn’t know.

Something clicked and took away any remaining doubts he had.  And for once, I actually noticed when it happened. We were on the sofa. His head was on my leg, and I was rubbing him. He twisted around, tilted his head up and we locked eyes.

Ever since, he’s never been more than a few feet away. If I go upstairs, he’s coming with. Taking the garbage out? Maybe I should make that bag a little lighter for you and eat something in it. How come I can’t go to work too?

My favorite thing in the whole world is our weekend morning routine. I drink coffee and screw around on my iPad, and he sits with his head in my lap. Having been awake for an interminable 30 minutes, he falls asleep almost immediately, and has woofy, ear flicky dreams, and he eats in his sleep.

Hanging on a Sunday

The bond really sunk in last Monday. We were out for our morning walk, which is at the same time kids walk to school. There were two girls half a block behind us.

Remember how I said Bosco is a freak deterrent?  Well… I noticed a guy, and my spidey sense told me he wanted to play some “hey baby” game with those girls.  Of course I wasn’t going to let that happen. So I stood 10 feet away from him until they went past, ruining his game.

And Bosco? He picked up on it – and moved so he was standing between me and the freak.  This is the dog who hides behind me when he sees a goose or a group of children. But a freak – a potential threat – he took the lead. And the freak went away.

Bosco knows now, that aside from nose buttering, he has nothing to worry about when he’s in the house. And he’s been a cuddly clown, prancing around and making sure I notice him. He HATES my new workspace, and does everything he can to pull my focus away, mostly by asking for (and receiving) affection.

His last resort is to play “sofa shark,” where he pretends to give up and go sit on the sofa. Then he suddenly pops his head up, and the cutie faces start all over again. I have to explain that work means money, and that means snacks, and he sighs and flops down in resignation.

But the best part, when I know that I’ve done right for this dog, and that he is happy, is when I catch his eye. There’s no caution, no worry. No fear.

It may not be a cute YouTube video, but to me, it says “I love you” loud and clear.